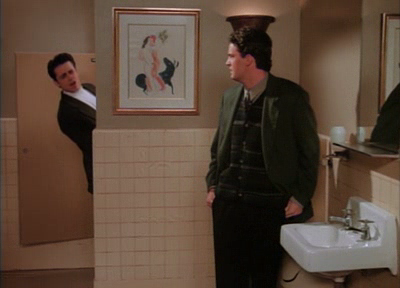 Forever mythologized in my heart as ‘The One Bill Lawrence Wrote’, ‘Candy Hearts’ is a really fun episode of Friends, particularly because its another early Janice/Chandler story line, which always bring out the best aspects of Matthew Perry’s performance as young Chandler. When it tries to get emotional (in the Ross sub-plot, which becomes the emotional focal point of the episode) it struggles a bit, but the consistency of the humor throughout picks up the slack in a few of those moments.

‘Candy Hearts’ – like much of Lawrence’s material in his later work on shows like Clone High, Scrubs, and Cougar Town – utilizes a lot of goofiness, almost as a way to deflect attention from some of the heavier, “bigger” ideas at the heart of his scripts. In ‘Candy Hearts’, its the idea of destiny, paralleled in Ross and Chandler’s situations (as well as the women, to a lesser degree). Both of them find themselves engaging with their exes – Ross ends up having dinner with Carol while on a date, after watching Susan storm out, and Chandler gets set up on a blind date with Janice – and looking at two sides of the same coin. Chandler can’t believe his destiny is to be with Janice (even though she tells him after he breaks up with her, yet again, on Valentine’s Day), and Ross still can’t accept the fact that him and Carol – after his date leaves, he insists that “there’s something there” between him and Carol, which she doesn’t deny, but ultimately rejects.

Both of their situations arrive out of comedic conveniences – in a city of millions, Joey’s date being friends with Janice is a lotto shot, as is Ross  and Carol having Valentine’s Day dinner at the same hibachi table – but both speak to the insecurities of these two young men who can neither achieve or escape what they believe their ‘destiny’ to be. There’s a moment during Janice’s speech where Chandler is thinking if Janice is right – and it plays back-to-back with Ross’s hopeful moment where he tries to kiss Carol. In some ways, Ross and Chandler are filling the opposite gender roles in their respective relationships – Ross/Janice insisting on some idealistic destiny, and Carol/Chandler rejecting the idea (for fundamentally different reasons, of course… Chandler isn’t gay, but you get my point).

It’s a really well thought-out sequence, and although its another example of Ross regressing from the pilot (or at least circling in a holding pattern), Chandler’s honesty with Janice shows a micron of growth on his part. Of course, this is hardly the last time we’ll see Janice – there are still nine more seasons of her popping in, most notably next season.

Which brings us to the rest of the episode – the Boyfriend Bonfire the girls decide to partake in. The girls are also trying to play with destiny, by burning off old memories in search of good karma and whatever else the bald woman might’ve suggested. On one hand, it paints the girls as love-hungry women who are basically acting like witches to find men – but on the other hand, the scenes have a very 90’s-feeling, feminist Gen X rebellion against holidays of love I kind of enjoy (although its a theme many, many sitcoms would touch on, in some form or another). I can do without the hot fireman and that Valentine’s Day is their busiest day of the year, however – googly eyes over someone basically insulting the intelligence of an entire gender makes for some very awkward comedy.

‘Candy Hearts’ is definitely an episode stronger with the male leads (Chandler and Ross) than it is with the females – but this unsurprisingly would happen a lot over the seasons, especially in later seasons, with baby fevers, weddings, early 30’s life crises (multiples), and of course, all the “we were on a break” shit. But ‘Candy Hearts’ is an episode with a lot of laugh out loud moments (Kudrow’s delivery of “the semen of a righteous man” is still hilarious) and a little injection of heart, always a formula for success on a comedy.

– For once, the Ross physical humor mostly lands. It works best when he’s sitting in a chair, and not pacing around or moving robotically from spot to spot making faces.

– breaking news: Joey has a credit card in this episode. Wonder what the APR was on that sucker.

Some would consider Jon Lovitz as the first celebrity to appear on Friends – and as most celebrity appearances usually went on Friends, it’s not the most pleasant thing to watch. But what’s more important about ‘Stoned Guy’ (than the show setting itself up for one of its uglier trends) is the levity which the humor surrounding the two main plots, which involve Monica and Chandler dealing with varying levels of success in their professional lives.

Although Monica’s story gets the title mention, Chandler’s short-lived corporate rebellion takes the front seat for most of ‘Stoned Guy’. After being offered a raise, Chandler quits his job working the WENUS (Weekly Estimated Net Usage Systems) in search of trying to figure out what he really wants to do in life. Of course, that wouldn’t really happen for at least another eight years, but the events of the episode speaks to an issue every generation deals with: do you take the less fulfilling corporate job with the good paycheck, or do you pursue your true passion in life (unless being a data analyst is your cup of tea, although those jobs have largely been replaced by computers in 2013)?.

Monica is basically dealing with the same situation; the only difference is she knows what her passion is, she just can’t find anywhere to accept her. When Phoebe tells her about a job as a head chef with all the caveats (full menu control being chief among these), Monica’s determined to impress him with whipped fish and other fancy offerings. Of course, the plot goes off the rails when Lovitz’s character shows up stoned and predictably gets cravings for taco shells and gummi bears, but when Monica ultimately doesn’t get the job, it closes on a moment of frustration any 20-something can relate to. Of course, her failure isn’t attributed to her shortcomings – by making Lovitz high, the responsibility of Monica’s failure is on him, not some cooking mistake on her part – but I think it gives her arc in the episode a more meaningful conclusion, when she asks if she missed her ‘chance’. It’s something we all wonder after a failed interview or audition for the ‘perfect job’; how perfect is it if we don’t get it? Do we pick our careers by chance or blind luck, or is there a ‘destiny’ for us all professionally? Thankfully, the show doesn’t try to answer the question, and it doesn’t end with Monica in a depressed state. She might not have the cushy office or well-trained assistant Chandler does, but she does exit ‘Stoned Guy’ with her soul and self-respect intact (something Chandler wishes he still had).

The Monica/Chandler plot mirroring works really well, and takes away from the emptiness of Ross and Rachel in the episode. Ross can’t get the curator of insects at his museum to like him because of Marcel, who continuously tortures his dates – but of course, it’s not enough motivation for desperate Ross to get rid of the annoying little fucker. At this point, the one-note monkey jokes have already run out (although he hasn’t changed the TV yet, the one funny thing he ever does), and watching Ross try and justify his monkey instead of dating a beautiful girl… well, it’s really pathetic. I’m willing to forgive the awkward dirty talk (and the gay undertones of him and Joey doing it, which draws a massive laugh from the studio audience): even though just about every comedy has failed at using dirty talk jokes/story lines, it appears to be a pre-requisite for every comedy since 1990.

Rachel’s miniature presence in ‘Stoned Guy’ held some potential – Monica basically tells her she is a bad waitress – but with so much attention given to Monica and Chandler, her role in the professional failures of tonight’s plot were largely ignored. It would’ve been a good time to have Rachel stop for a second and consider her future as a waitress: instead, the dispute is quickly resolved by Monica tossing some money her way to work for her (don’t worry, Rachel will never not be shallow on Friends). But somebody has to get the short end of the stick in the episode (along with Joey, who gets the short end of the stick consistently for the entirety of the show), and Ross and Rachel share it in ‘Stoned Guy’, an episode with plenty of funny moments that don’t completely mesh together for a coherent episode.

– lots of dirty humor in this episode, even for Friends.

– Phoebe is not ‘quirky’ in this episode, she’s just clueless. I hate when she’s just a dumb ass who is ‘out there’… though of all six main characters, she is the one who never really gets nailed down at any point (always using general weirdness as a fallback).

– it’s very weird how money plays into the episode for both Chandler and Rachel, who essentially give up their dignity for bigger paychecks.

– NBC loved them some Jon Lovitz back in 1995: he appeared as Gary Fogel a few weeks prior to his Friends appearance on the Seinfeld episode ‘The Scofflaw.’

‘The One with the Candy Hearts’: A-

‘The One with the Stoned Guy’: B

What did you think? Cancel reply